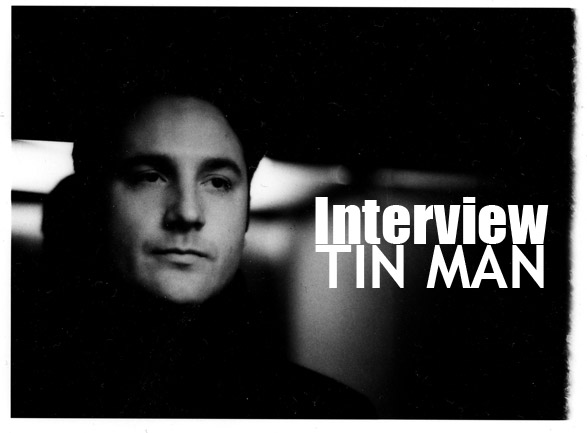 Dark star from the underground, ambiant / acid / delicate techno dreamer (and singer) Tin Man takes time to speak with Boing Poum Tchak! while he’s releasing his last and excellent 12″ : Cool waves EP, including the amazing song Constant confusion. Find out who really is behind the shadow, now.

The name TIN MAN comes from a character in a very popular American fantasy story. He is something like Frankenstein’s Monster, but on a journey to find himself the heart he doesn’t have. I think the image fits to a music that is a collage made up from remains, which has as intention to also find sympathy, empathy, and eventually some humanity.

What are your influences ?

Diverse. When I began buying electronic records I would shop in the used bins at record stores. There you could find a mix of new age, ambient, and concrete. I bought mainly those records that I thought would work for making mixes. I went on to become a proper vinyl junkie. Certain music would capture my interest for years and become part of my life. My music is generally some combinations of the following : Suicide, YMO, Drexciya, Acid House, Pansonic, Mego Records, Cheap Records, Melancholic English electronics 70s-now, Berlin Techno, Rocksteady, and New Wave.

Acid / Ambiant / electronica-techno songs… You compose different genres, but all your works are linked in some kind of way : we are able to identify the “Tin Man sound”. Can you tell us more about your music, and the evolution of your sound ?

I hope the sound is evolving to tell the stories I want to tell. I am less interested in working in a genres or in inventing a new style, than I am in making a consistent record. I hope that all of the sounds and ideas come together in a way that gives a special, one-of-a-kind, impression. Evolution is a combination of mutation and selection. For me, the mutation part is alot of time writing and playing in the studio, the selection part is finding the combinations that make me feel something specific and new.

Wasteland in 2008, now Cool wave (incl. the mind-blowing Constant confusion), you’re using your voice more and more (and better and better, I feel). When did you start to introduce this element in your tracks ? It’s quite uncommon to “sing” into electronic tracks. What do you feel about this ? What do you want to express with this ?

When I think in general about singing, I ask myself if its really necessary. It seems arrogant to share your opinions with just anyone. Especially, when content is usually revolving around the same old subjects. The remedy to this problem is often ambiguity. At some point, I felt that the music needing singing. That without it something was missing. Now, when I write, I feel it is a very natural part of expressing ideas, and a way to bring everything to a point. If you want to say something, you can often say it easier with words. What can be said with words, should be said with words.

Some words to say about your new EP Cool wave ?

I grew up in California. I left Los Angeles for Vienna two years ago. This records reflects on life back there, and on life in between here and there. Generally, its also taking waves as a metaphor for the ups and downs of life and how energy comes in cycles. Catch them when you can, don’t feel too bad when you can not.

A last thing to say ?

Thanks for the interview. Maybe see you around.