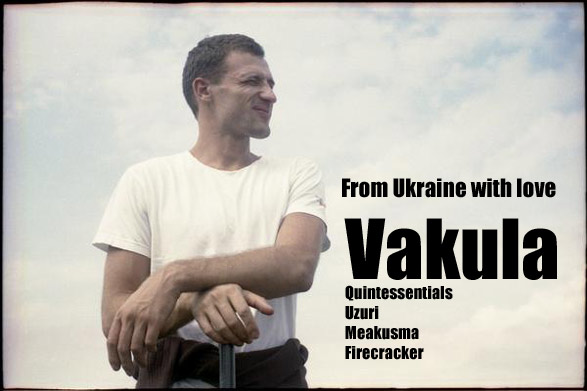 Who could imagine that one of the best innovative house / detroit-house sound of the moment comes from East-Europe ? After Russian Anton Zap, let me introduce you Vakula, Ukrainian electronic artist who has signed some experimental warm & groovy underground-house tracks on Uzuri, then Quintessentials, Meakusma, before releasing a record on Firecracker in 2009. Find out more about him, his thoughts on electronic music in Ukraine while listening the mix he did for Boing Poum Tchak! with only unreleased material from him. Vashe zdo´rovye !

Special thanks to Anna Iarotska for this excellent translation, for her time and kindness, and Fabienne who has made the connection between us. Great job girls !

I do not have any special education. So I don’t have any diploma, but I have worked in absolutely different places and performed various kind of work: from construction site worker to the deputy director of restaurant. All what I can do now, I have learnt through my life and an uneducated youth. It is connected with my childhood, I didn’t want to study. Instead of sitting and listening attentively to to the teacher I examined the nature from a window of a school class. Kept getting lost in my dreams. In my head there was a never ending flow of thoughts which were difficult and unclear to me at that age, but I couldn’t stop it. Because of this my parents did not understand me, the same with my friends from neighborhood.

When I became a bit more older, have understood that without education it will be very difficult to live in this world, and especially in Ukraine where there are practically no human rights. The government of Ukraine does not care of its people. Then I have decided to go to a technical school, I wanted to learn how to sew clothes. But I failed the enter examinations for free of charge education…. I had working class family and my parents couldn’t afford paying for my education.

Further I can tell you a lot about how with 16 years I left my parents’ house, left small city Konotop and went to a big Kiev and later on to Moscow to earn money for education, but it will take too much your precious time.

What did you listen when you were young ?

Unfortunately I have not grown up in black quarter where everyone knew name Marvin Gaye, Minnie Repperton, Roberta Flack, and not somewhere in Europe where every 100-th man could listen to the music of Steve Reich. In my native city it was very difficult to find good music at the time of my youth. We were looking forward to everything what arrived from the outer world thanks to rare visits of our older brothers to bigger cities, and copied music on cassettes. At the age of 9 I fall in love with disco music, but not that disco music you could imagine. For us a disco were such groups as Boney M and ABBA. Later on appeared pop electronic, technotronic, snap etc. With time I began to listen to hip-hop from Run DMC, Grand Master Flash, Digable Planets, but in our city then was no concept of HIP-HOP, we called it RAP. In the middle of 90s I started to like the group ORB and similar music. Music of ORB reflected my mood/spirit in 90s. I was very much interested in the psychedelic component of their music. One can say that because of ORB I discovered for myself Steve Reich and Terry Riley later.

How did you discover electronic music ?

1997 with a friend of mine we went to visit his friend. In the apartment of his friend a strange music was playing. I have asked the guy what was playing. He answered with a smile “It’s “Kraftwerk”, don’t you know them??”

After his words I felt ashamed: he was saying this name so confidently as if he knew this group since always.

Being very much impressed I came home and called my friend in Moscow to ask him to get me this music… And at the end of tha month I had to explain my parents why phone bill was so big…. Although at those time we were one big country ” Soviet Union “, negotiations/talks between two countries used to be very expensive and are not least expensive now for common people…

What kind of music people listen to in Ukraine ?

In Ukraine there are three types of people. 50 % from them like to listen to music like chanson with texts telling about difficulties of life in prison. Songs in which the singer is constantly complaining how hard life is. Meaning of such songs is usually negative. 40 % of people listen to Russian/Ukrainian pop music. I do not understand this music either. And 10 % listen more serious music. These ten percent include fans of totally different styles starting from jazz up to electronics.

What the club scene in Ukraine looks like ? What’s your point of view about it?

I know only rumours which say that the pro-European Ukraine people feel music and understand it better. And I know by myself for sure, that the main part of interesting people in Ukraine come from pro-European part of the country.

When did you start composing ?

Actually I never though about myself that I’m a musician. If I am not wrong, at the end of 2002 in a musical shop “Дискоксид” in Moscow I met a guy. His name like mine was Mikhail. We were buying there together vinyl records. This person influenced me by showing me the musical computer program REASON. It seemed to be interesting to me. At that time I had no computer and didn’t even know how to handle a computer. But Mikhail having seen my interest left me his laptop so that I could study this program… And for days I was sitting sat at the laptop creating interesting sounds.8-))) I am very grateful to Mikhail for that. I can say, he was my sensei.

A year later in Moscow I met Alexey Stratonov aka Seldom and together with him we created the project with the name “Casual Undeground”. At this time we were interested in the deep sound of techno music and tried to express own depth by means of analogue sounds.

Two years ago Vakula was born. During my trip home I visited a small city of Putivl, it is near Konotop. Putivl inspired me, and there I understood how much I love Ukraine. Places there are very historical, full of secrets of the past. Inspired by this trip I had a desire to create a national hero Vakula, like in old Ukrainian fairy tales.

What’s a good definition of your sound ?

Noise and confusion 8)). I Think, my music is a fixing of certain thoughts which lasts to the end of the sound.

Who are your “godfathers” ?

My grandfather was a skilful bandura player. In my childhood he used to set us around himself to sing the next verse written by our national Ukrainian hero Taras Shevchenko.

How do you work on your tracks ?

When I lived in Moscow, we used to gather in the apartment of my friend and recorder our experiences on a tape delay or Akai 2000. We used the Soviet analogue synthesizers, a bass guitar and were looking for harmonies needed by pressing various chords 8).

We used to go out to the centre of Moscow and recorder surrounding sounds. During the inspiration moments it is important for me to concentrate, otherwise it won’t work 8).

Now I have transported a part of my equipment to Konotop and temporarily work in the private house of my parents and with help of my nephews I’m working on new loops. 8).

How was the connection between Uzuri, Meakusma, then Quintessential ?

I know only that they are in contact with each other. They are different people from different countries. Probably they have a common goal. I love these people that they try to keep vinyl manufacture/production alive.

In 2009 there will be two or three releases from Vakula, one of them, I hope, will come out this spring. Also I plan to collect group for live performances, but probably it will last longer, up to 2010. And of course I will continue to do dj-sets in the Moscow club “Propaganda”.

What is your biggest dream ?

To collect studio equipped with a maximum quantity of musical analogue instruments and to twist handles for hours without a break 8).

How did you work on the mix for Boing Poum Tchak ! ?

While answering your questions I listened several times Ash Ra Tempel “Eloquentes wiesel” and decided to give away a mix of several unpublished works. Maybe it will be slightly different from your expectations 8-). But I do compilation of my tracks for the first time in my life. And I feel a little bit excited. Please do not judge strictly, I’m just learning.