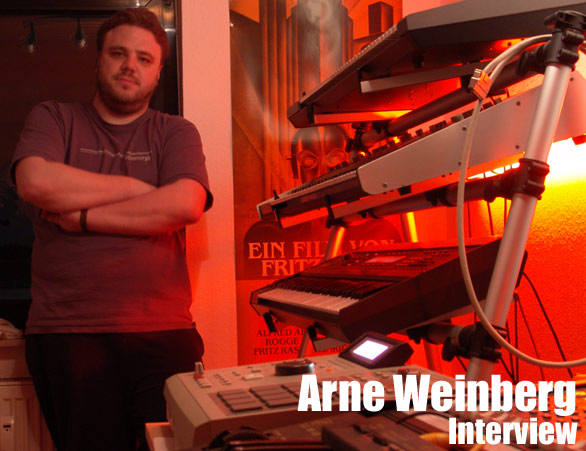 Arne Weinberg is that kind of artists who prefer developing their own melodic retro-techno sound, rather than following any trends. Since 2001, he has released his music on labels like Styrax, Matrix, Echocord Colour, Down Low Music, and AW, his own label. Here, he explains the philosophy of his music, why he decided to move from Germany to Glasgow, and if one day, neo-detroit techno could become the next hype.

Melodic techno for example is not only simple dance music for the feet, it needs your brain and mind aswell, so there is no danger that this will ever become a hype.

Who are you Arne ?

My name is Arne Weinberg, I’m originally from Germany and I’m producing electronic music, mainly deep melodic techno since 2001. Since 7 months I’m living in Glasgow, Scotland and I’m running my own recordlabel AW-Recordings since 2004. Apart from producing music I also deejay since 1994.

You run since 2004 your own label AW. What is its philosophy ?

The label was not really planned in the beginning. I released a limited 7” with two tracks of mine just to see what will happen and how the reactions and feedback will be. It was really nice and the feedback was great. So I thought more serious about doing a real label and got in touch with some distributors to see if they would be interested to work with me. Since that time I work with Neuton in Germany and Clone in the Netherlands and I’m happy about the way things are working out. Selling vinyl is a tough business nowadays and I’m always happy if I can reach break even with a new release. The philosophy of the label is that I want to release music I like and that the focus is not on money, trends or rules. For me it’s really important to have contact to the artists and to build some kind of label family. Also it is my main platform for my own music of course.

Music should always come from the heart and soul, no matter what kind of music. And emotions don’t care if they are transported by old or new music. Music has to touch me, that’s most important.

You recently leaved Germany for Glasgow in Scotland, whereas a lot of people would like to live in a city like Berlin. So, why did you move ?

Me and my wife just felt fed up with the life in Germany. Too much stress and pressure in every days life and in your job. The overall bad mood in german sociey and the complaining of the people about everything without trying to change it was just not our thing. So we decided to move to Glasgow. We knew the city before as we’ve been here pretty often and it was always a feeling like coming home. Now, after 7 months we realised that it was the absolute right decision. Glasgow is like an oasis. It has a huge music scene and a lot of talented people are living here. The scene is fresh and open minded. But on the other hand Glasgow is still small enough not to distract you from your own plans and musical projects. I don’t know how Berlin really is, as I’ve only been there 3 times or so, but I think it’s pretty obvious that most of the people that move to Berlin suddenly start to change their sound, mostly bad unfortunately. Maybe the city is too big, I don’t know.

I want to release music I like and that the focus is not on money, trends or rules. For me it’s really important to have contact to the artists and to build some kind of label family.

You started this year a new project named Onmutu Mechanicks. Can you tell us more about it ?

In the beginning I did that project all by myself and used it as a playground for more abstract stuff that still is melodic and deep. It was mainly to get the head free. After some time I met Niko Tzoukmanis (one half of the duo Audision) and we became friends and started to work on some stuff together. This was a good time. After a year some things changed and also the move to Glasgow was going to happen, so we stopped the collaboration and I do Onmutu Mechanicks alone again now. Lately I started to focus more on some dub influenced stuff with this project and just found a label that is a perfect homebase for this kind of music : Echocord Colour. I really want to make dubby tracks that sound different from the usual stuff. I think most of the dub-techno stuff nowadays is boring and only copies the old Basic Channel stuff. So I hope I have a little bit more unique approach to that kind of sound. There will be coming more from Onmutu Mechanicks on Echocord Colour in 2009.

After having sampled Rock with Big Beat, Disco with filtered House, New-Wave with Electro-Clash, do you think the next fashion genre will be music which will sample early (melodic) techno / early electronica from the 90’s ? And more seriously, do think nowadays a new form of electronic music style can emerge, or have we already explored all the possibilities of the sound ?

No, I don’t think that melodic and deep techno will become a hype or trend. This music is not made for the average club audience. Of course ytou can play melodic techno on a party and there will surely be some people dancing but most of the time people in a club want to think about the music and just simply have a good time. Melodic techno for example is not only simple dance music for the feet, it needs your brain and mind aswell, so there is no danger that this will ever become a hype. I’m pretty sure that there will always be a new style. I mean the frontiers of electronic music might be already explored but with every new music technology invented there will be new ways to do new music. Recently the newest thing is Dubstep which I think is interesting. But to be honest, I don’t care if the music I listen to or the music I produce is the newest and hottest trendy shit. Music should always come from the heart and soul, no matter what kind of music. And emotions don’t care if they are transported by old or new music. Music has to touch me, that’s most important.

What’s next for you now ?

Right now I concentrate on the new release on my label AW-Recordings. It’s a 12” by Deixis, a good friend of mine from London who also runs his own label Abstract Forms. Apart from that I just work on new stuff for Onmutu Mechanicks and I’m currently working on some remixes but I just can’t tell more about that yet. There are some plans for my second album in 2009 aswell.