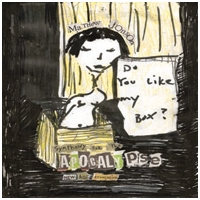 The apocalypse of Jonson

Mathew Jonson is back ! After his great album under Cobblestone Jazz (with Danuel Tate and Tyger Dhula) released during the last autumn, he’s returning back to his solo productions.

Deep, epic, wild, modern, emotional, strong and… so unique. Nowadays there are few contemporary producers you can instantaneously recognize just after hearing only few seconds of a record. Count them ! They are not numerous… Mathew has his own style, a real magical feeling with the sound, and the way how he manages the space (he lets a lot of time to the elements in order to they find the right place) is definitely his main strength.

B-side. Twin cobras has a dark and punchy dub-step rhythm and sounds like some early warp IDM atmospheres. Very good moment, with a lot of tensions and suspense.

But the essential track, in the tradition of Mathew Jonson’s golden tunes (She’s he, Decompression, Automatic, Typerope, Marionette…) is on the flip.

A-side. Symphony for the apocalypse is an epic, wild, and really mad dope ! First, the opening is great. In less than ten seconds you are in the mood, impossible to stop, you’re hypnotized by oriental vibes, and around you the elements subtly grow up, it’s so coool, you’re high… Then the trancey synth-line comes up, and you slowly feel the rising of the pressure. Something is going to happen…

In the middle of the track, the nature is angry, and decide to take the power : violent storms sweep up all the elements, volcanoes wake-up, the lands are flooded, and seisms destroy all the places everywhere. The total apocalypse. Then the trancey vibe comes back before this world return into its primitive form. Finally the last part (with the lfo-filtered noisy synth) let the gods appear and tell us : “You had been warned boys. You have screwed up, you had to pay the price”.